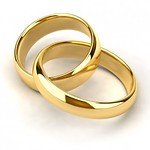 One day while on the website Reddit somebody commented that Jews were racist for forbidding intermarriage with non-jews. Really? Let’s think about this.

Religious Jew Joe has three girlfriends he dates.  He is ready to settle down and his girlfriends all want a husband, a house in the suburbs and children.
Girlfriend #1 is Mary.  She is a religious Christian.  She works on Saturdays and he can’t go to church with her on Sundays. They can never share Mary’s favorite food – pepperoni and cheese pizza. One night they talked about someday having kids and it turned into a big huge fight. It was impossible to agree on Sunday School verses Hebrew School. They concluded they could never have children together because it would be a constant battle.  Soon after that Mary met a preacher and lived happily ever after eating pepperoni pizza on Saturdays.

Girlfriend #2 is Greta,  an athiest.  She refuses to get off work early to light candles with him on Friday nights and once brought a salad sprinkled with bacon bits to “break the fast” at his sister’s house. Even so, religious Jew Joe still pondered the idea of marrying Greta and just living without any of his family traditions. He kept dating Greta until one day she got her credit card bill and had a mild panic attack and blurted out something about Jews and banking.  Poor Joe knew she was just terribly misinformed, but he wished she would have waited until his parents left the room before commenting. One look from his mother and Joe knew he would have to call it off and say goodbye to Greta.

This left girlfriend #3, Sarah.  She was a religious Jew just like Joe.  She made awesome matza balls and always kept a spare yamika in her purse in case Joe forgot to bring his. She even spoke Yiddish on the phone with his aunt in Brooklyn! Needless to say they were a great match.  Soon after they married Sarah’s dad got Joe a job at his prestigious law firm….. and Joe hadn’t even finished college yet!

No, forbidding intermarriage is NOT racist.  It’s smart.